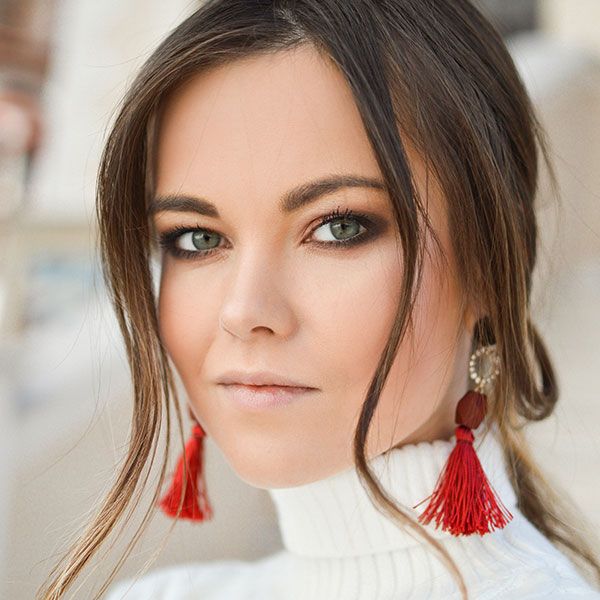 Remi is a travel blogger, style guru, content creator and visual storyteller based in sunny Palm Springs, California but down for seeing the world.

When I was researching Buenos Aires many of my friends told me that I only needed a couple of days in Buenos Aires and that it wasn’t very interesting. What I found when I arrived couldn’t have been further from the truth. I found myself wishing we had booked more time in this city. Argentina’s capital city, Buenos Aires has an eclectic mix of cultures, which you can see in its architecture, art, and food. There is a lot of European influence, but you still get the Latin America vibe. The porteños (Buenos Aires locals) certainly have a distinct personality and culture. The city has an incredible energy, and the people are creative, passionate and extremely opinionated. I would click my heels in a heartbeat to go back.

We started our first day in Buenos Aires off the beaten path with day trip to the small town of Tigre about 20 miles northeast of the city. Tigre is where porteños come to unwind. It’s where city dwellers reconnect with the water. This was our starting point for our half day boat tour of the delta with our Tours by Locals guide, Andres. Andres had a nice little river boat that took us through the meandering canals and waterways lined with weeping willows and charming bungalows. I could really see why the locals flock here to get away from city. We saw many of them in canoes, paddling their way through the canals or relaxing on their docks or hammocks along the water’s edge.

The Tigre Delta is a unique suburb built around the swampy land and meandering waterways that empty from the Rio Paraná into the Rio de la Plata. It’s one of the world’s largest deltas, and one of the only major deltas that does not empty into a sea or ocean. Instead, it flows into the Río de la Plata, which separates Argentina and Uruguay, after the Río Paraná splits into several smaller rivers and forms a multitude of sedimentary islands covered in forest and grasslands. With its plethora of islands and canals, Tigre is what Venice might have looked like before development. Tigre is named for the jaguars — which were called tigers — that once roamed here. 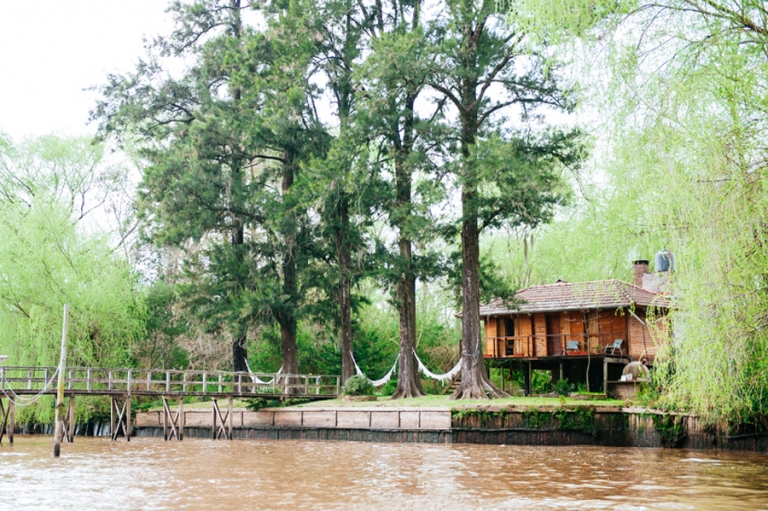 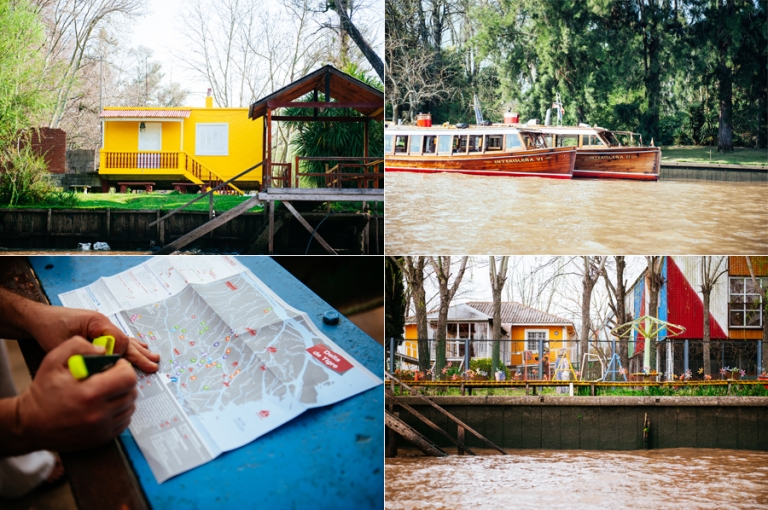 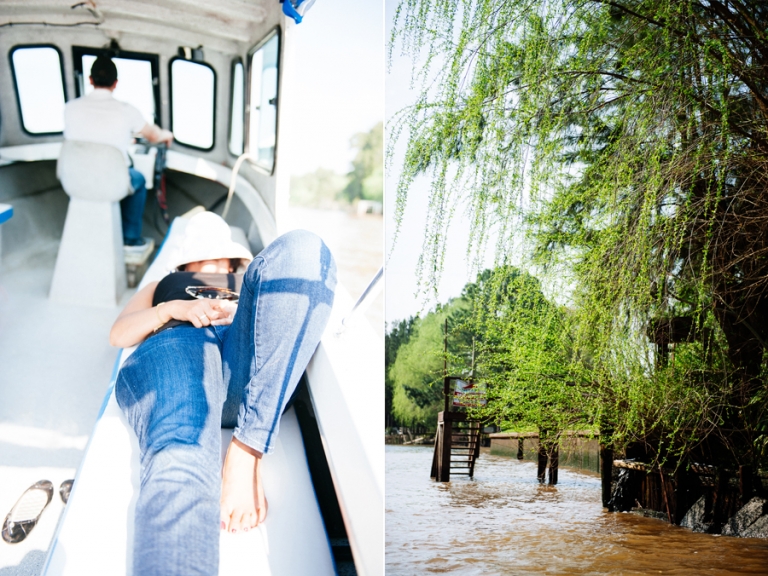 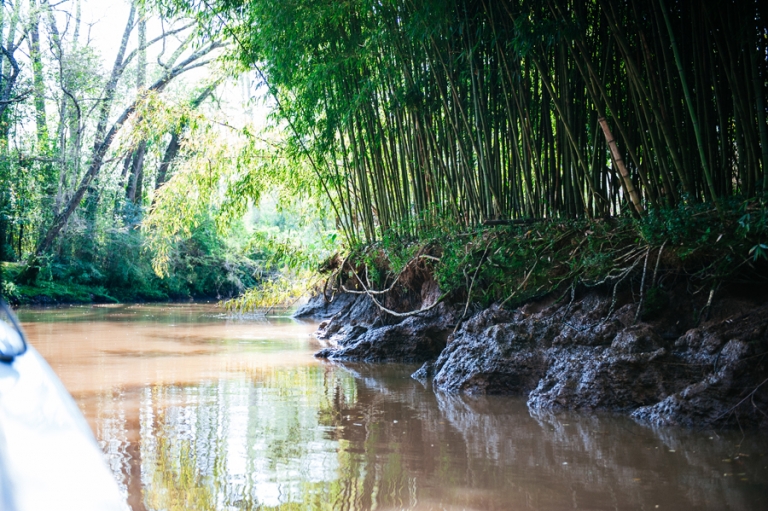 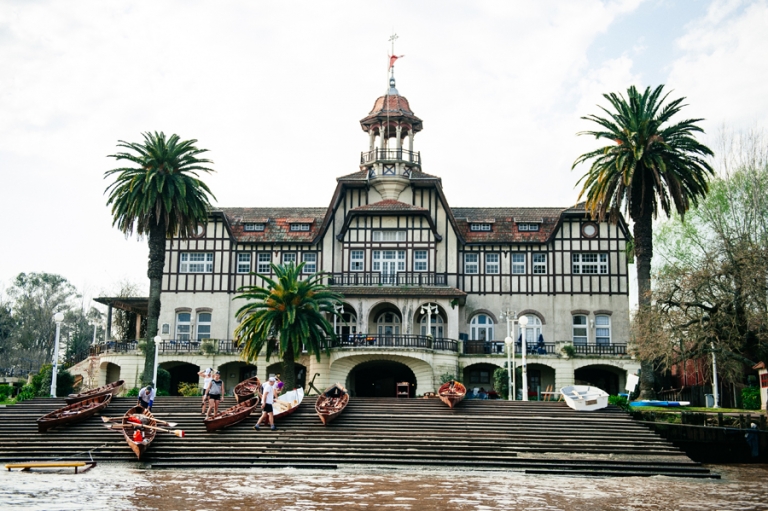 After we finished our tour of the delta we visited the local market in Tigre, Puerto de Frutos. The market is filled with shops selling housewares, furniture, wicker baskets, dried flowers, plants and antiques. I bought myself a beautiful little carved gourd cup and silver straw to drink Yerba Mate from. What on earth is Yerba Mate you might ask. It’s like an herb tea but the way it is served and drunk are quite unique. The leaves come from the subtropical jungles of Argentina, Brazil, Paraguay, Bolivia, and Uruguay. It was originally used as a drink by the native Guarani and later adopted by European settlers. Mate is made by steeping the dried leaves of the yerba mate plant in near-boiling water. It is traditionally drank from a calabasa gourd with a silver metal straw called a bombilla. The straw is integral to the drinking process because it filters out the leaves. You will see Argentinians drinking this everywhere you go. Drinking mate is often times a group experience; it’s a symbol of hospitality and friendship. It’s common to pass mate around in a circle so every one can have a few sips. If someone passes you the gourd, take a sip, it is considered rude to refuse. 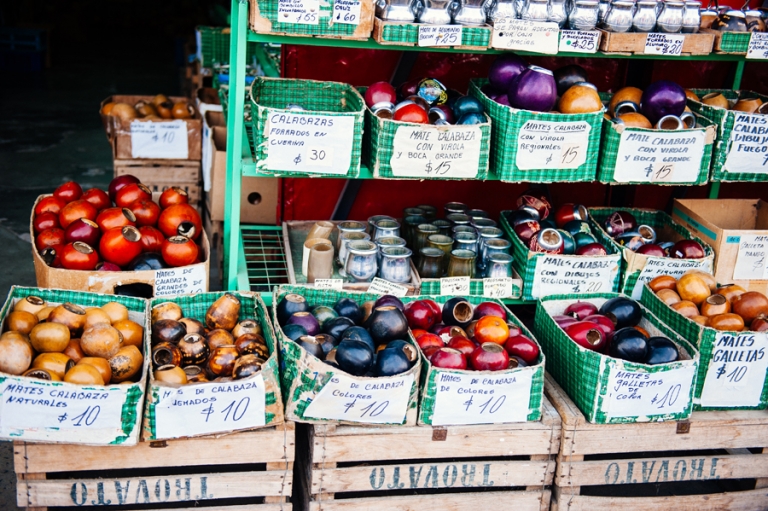 After the Tigre market, we stopped in San Ysidro, a charming little suburb of Buenos Aires. We saw some beautiful old colonial villas and homes. Here is the lovely view we had from the Quinta Los Ombues, a historical house located there. 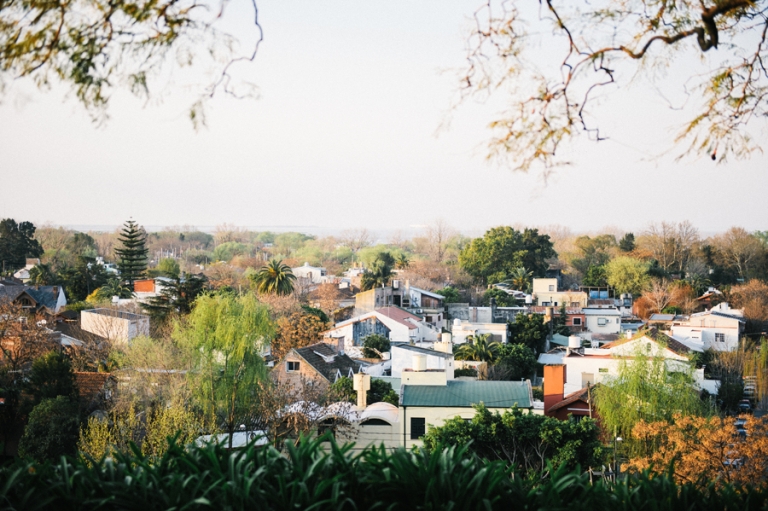 Tango Time! A night at a Milonga

No visit to Buenos Aires would be complete with out a visit to a milonga. The word milonga refers to both a style of tango and the place where people go to dance – in essence, a tango dancehall. Held every night of the week, milongas are great places to learn tango steps, watch seasoned pros glide around the dance floor and generally get a feel for an important aspect of Argentine culture. Our guide Andres, was not only a guide but a talented tango dancer. He took us to a local milonga with his dance partner. We were able to watch them dance and take in the local tango culture. He told us to be careful, because if we made eye contact with a man, they would most certainly come over and ask us to tango. I had a sweet older gentleman come ask me, but sadly I had to decline as I did not know a single step of tango. Next time I’ll take some lessons beforehand!

The next day we had another Tours by Locals guide, Alex, scheduled to show us all the major city sights. Alex was a fabulous guide and I would highly recommend booking him. His historical knowledge paired with his clever anecdotes and thoughtful stories made his tour delightful despite the pouring rain we had most of the day. We were able to see all the major sights and then some.

La Recoleta cemetery is arguably the cities’ most popular attraction. You can wander for hours in this amazing city of the dead and lose yourself among the gorgeous family mausoleums. Past presidents, military heroes, influential politicians and the just plain rich and famous have made it past the gates here. Look for former first lady and Argentine icon Eva Perón’s final resting place — admirers always leave flowers and other tributes. 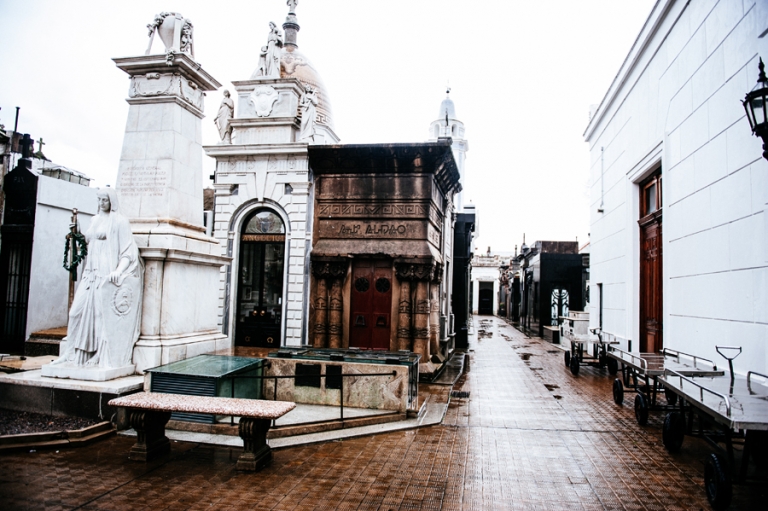 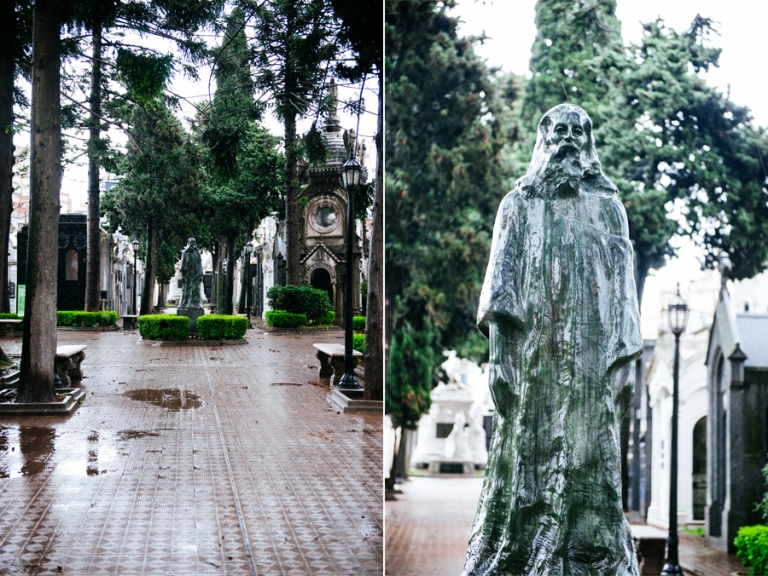 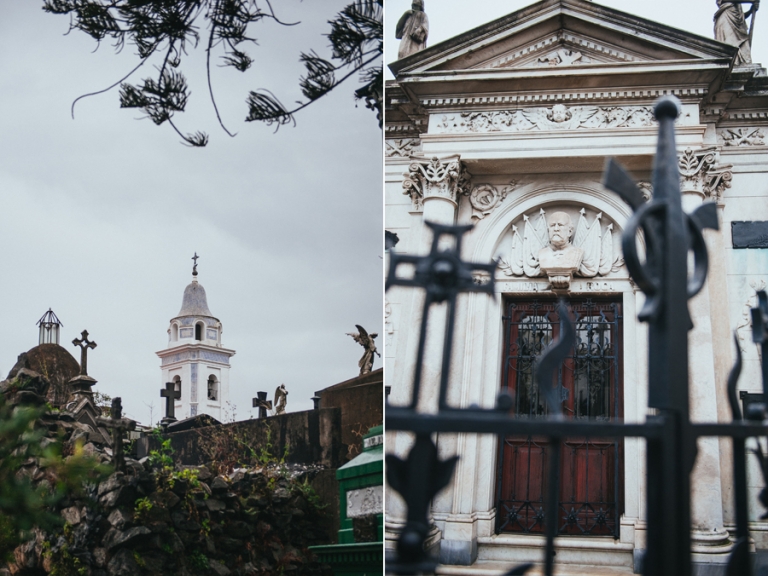 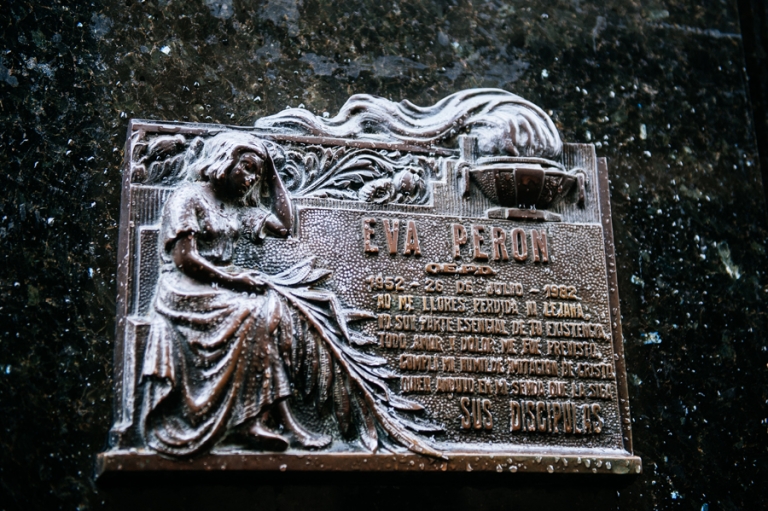 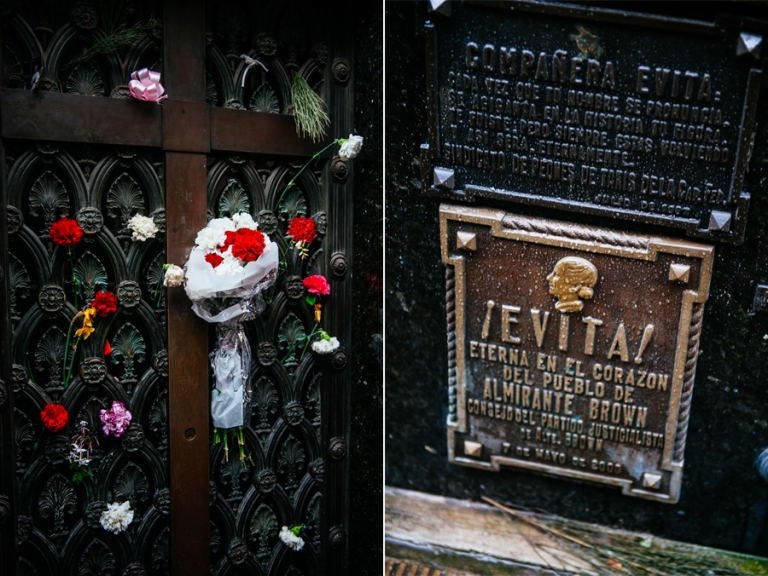 The dead are not the only residents in Recoleta Cemetery. About 80-some cats also roam among the tombs. A dedicated group of women from the area comes to feed and provide them with medical attention. 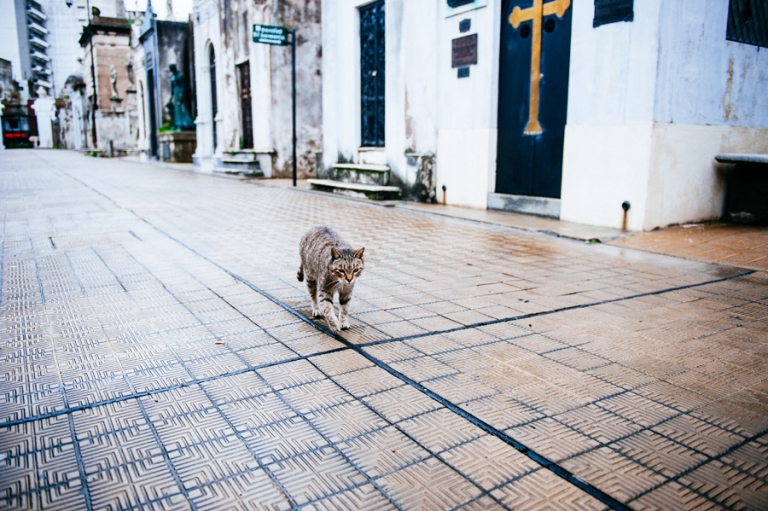 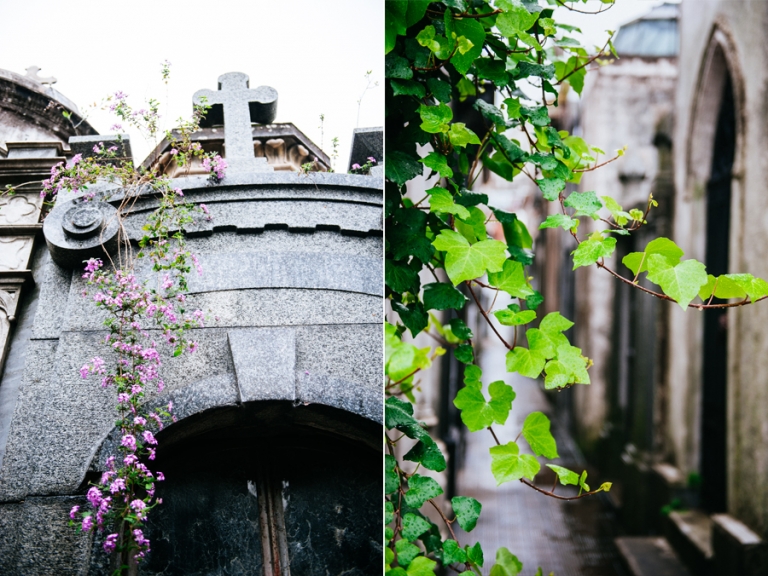 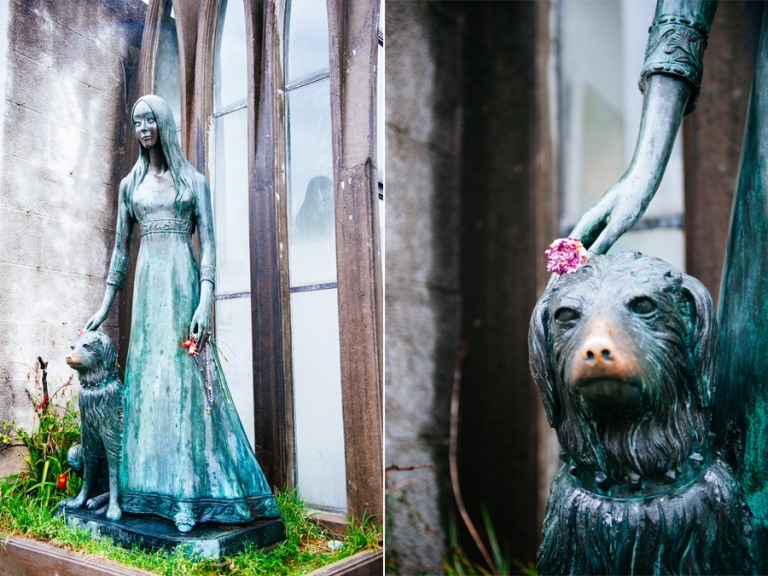 Casa Rosada is Argentina’s equivalent to the White House. The top balcony is where Eva Peron aka Evita, used to address the massive crowds in the Plaza de Mayo. It is open to the public on weekends only, as during the week, is the office of the Argentine President. 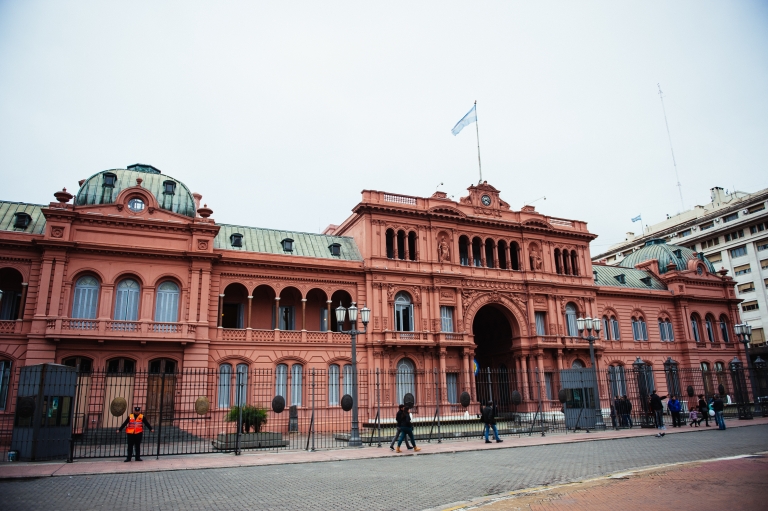 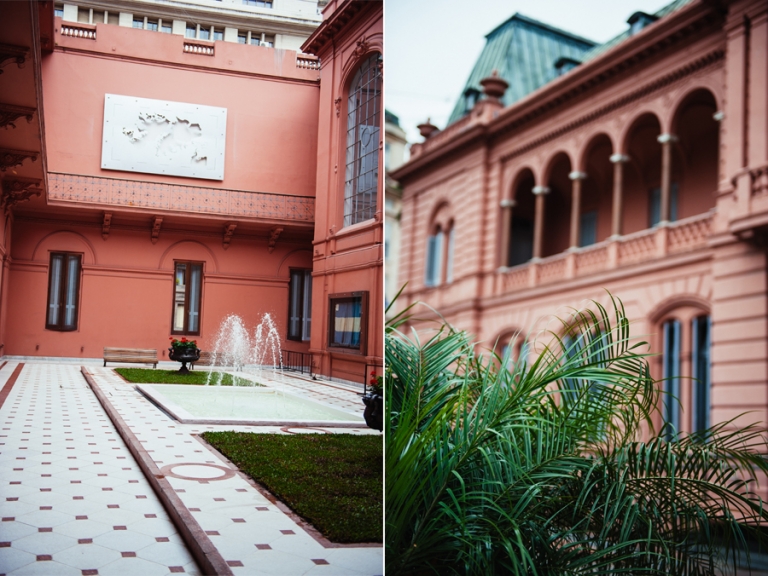 The Buenos Aires Metropolitan Cathedral is the former seat of Pope Francis, this cathedral has a history dating back to the early 17th century. The cathedral is a national historical site that contains the tomb of General José de San Martín, Argentina’s most revered hero. Outside the cathedral you’ll see a flame keeping his spirit alive. The church is free to enter and look around. Occasional free choir concerts are also on the docket and we were lucky enough to hear the rehearsal of a German choir singing a cappella. 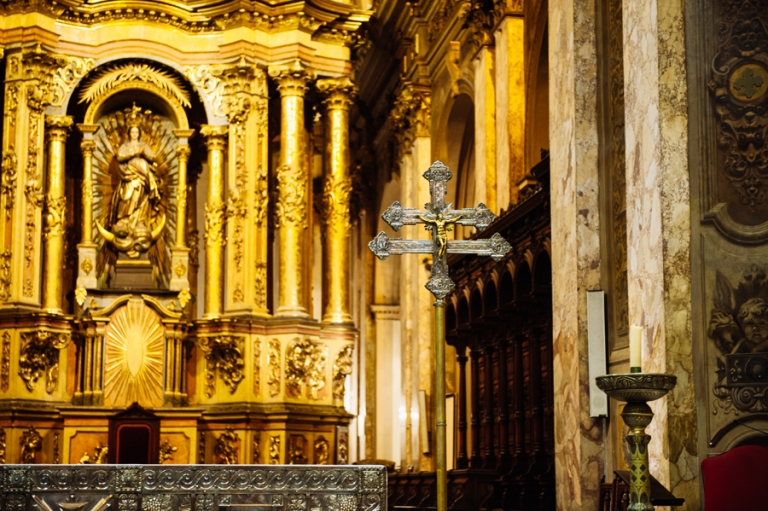 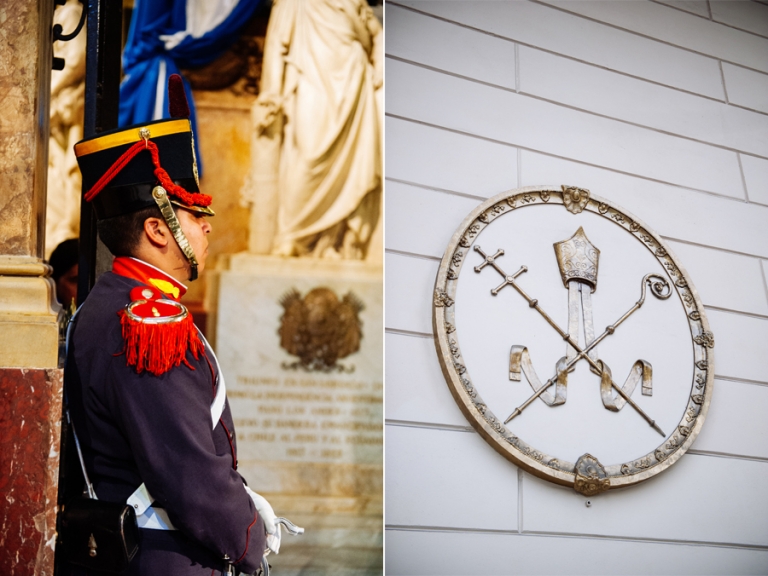 Recoleta is the neighborhood that gives Buenos Aires the nickname “Paris of South America.” The architecture is gorgeous and exudes an alluring air of sophistication and class. The streets are lined with elegant apartment buildings, exclusive boutiques, and former mansions turned into high-end hotels and embassies. 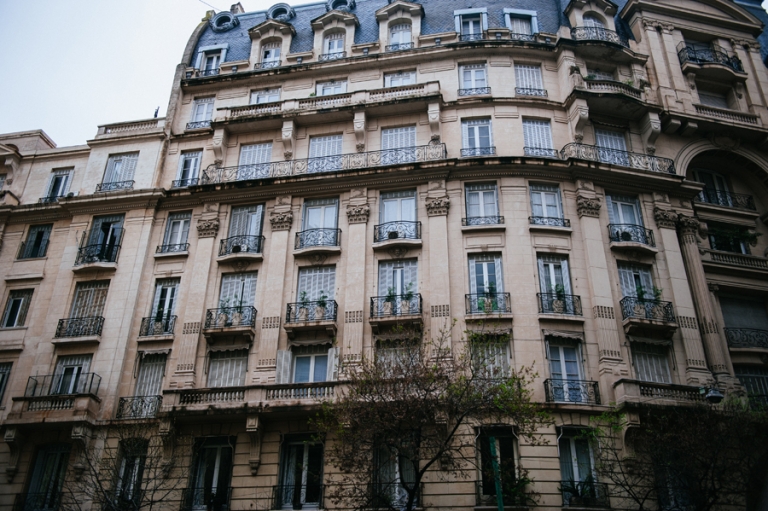 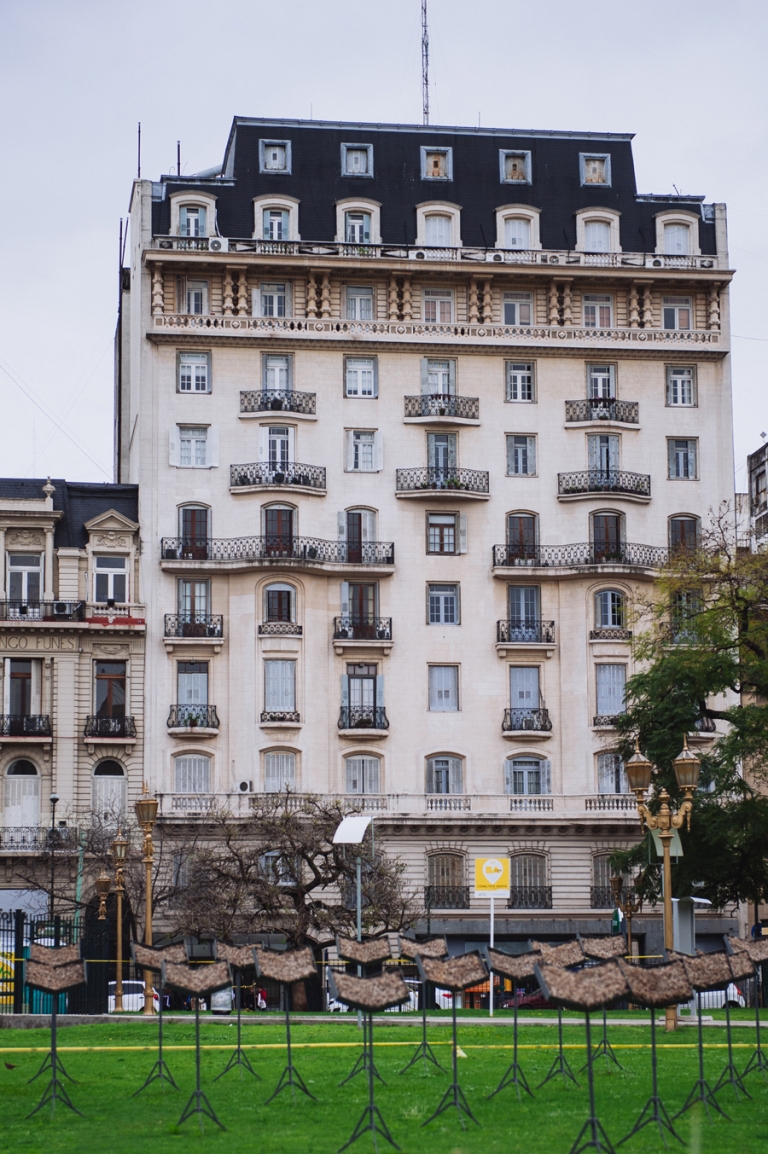 The barrio of La Boca is an artsy, working class neighborhood filled with narrow cobblestone streets, lots of graffiti, and colorful corrugated-iron houses and artists’ studios. It gets it’s name Boca or mouth in Spanish, because it is situated at the mouth of the Riacheulo River that runs along the cities’ southern border. 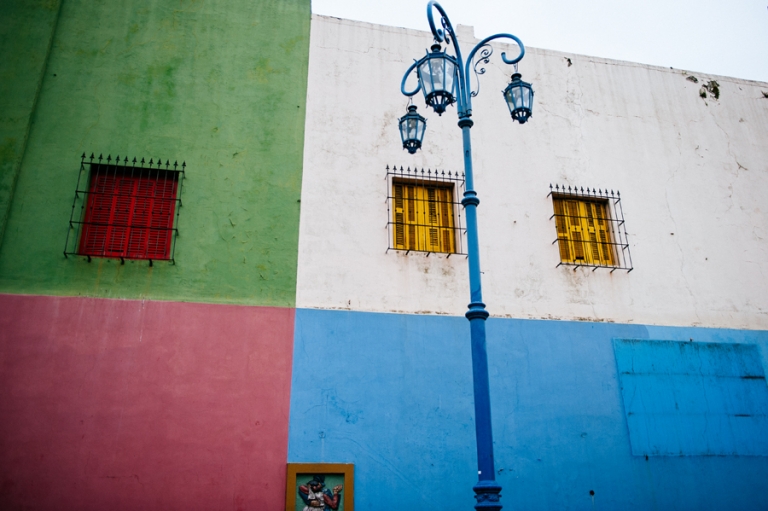 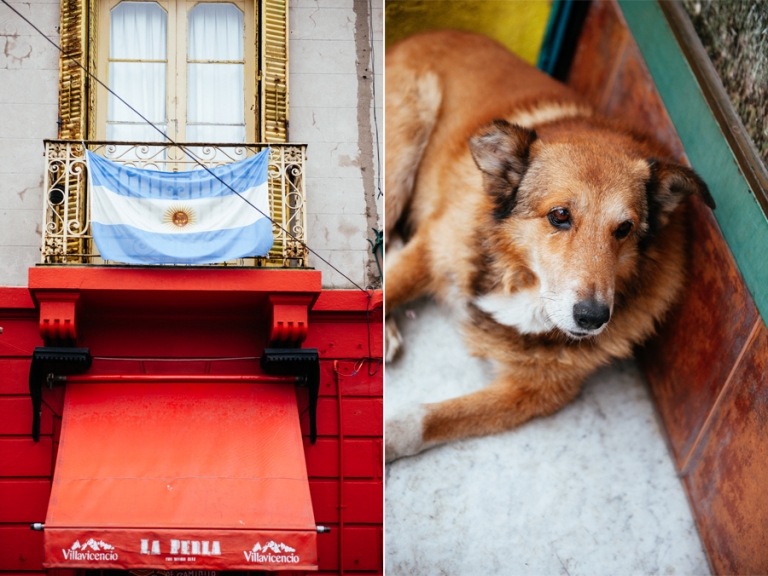 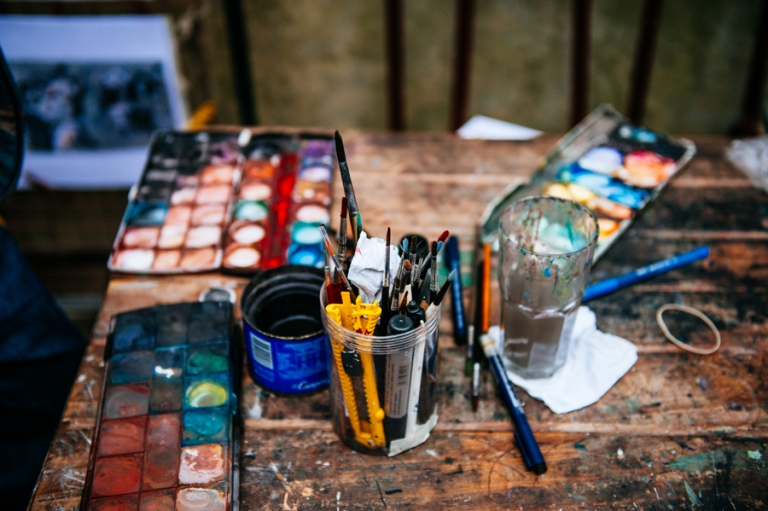 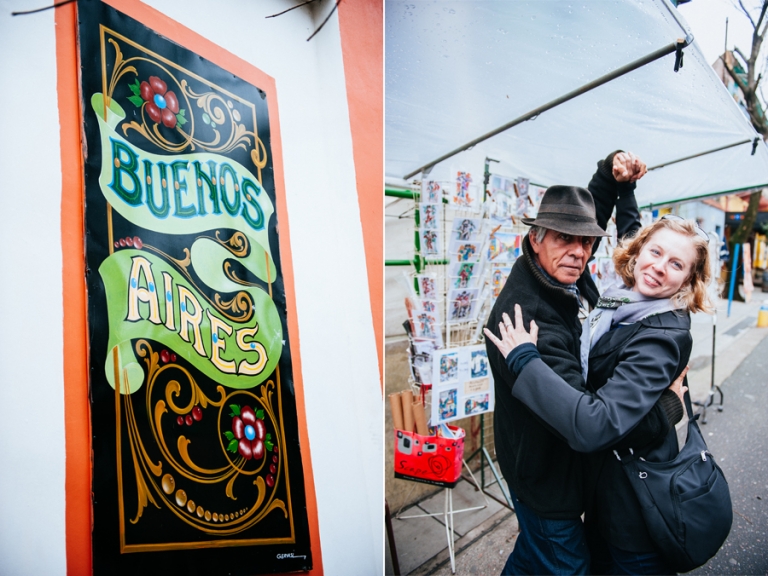 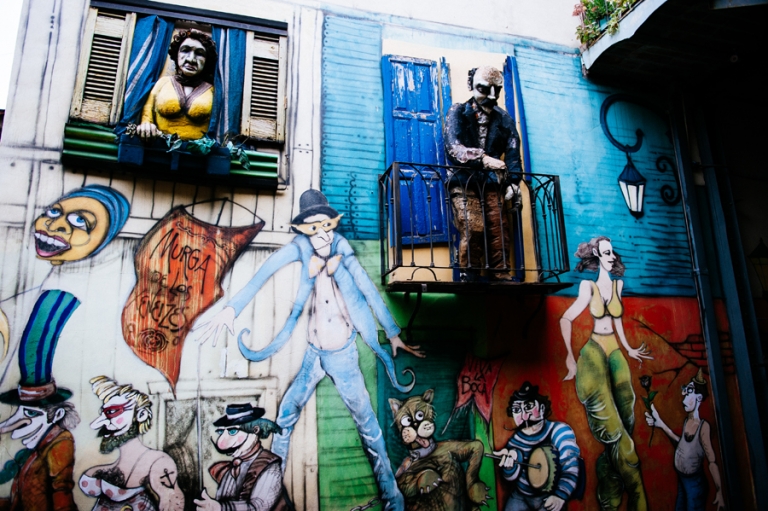 We stayed in Palermo Soho at well located boutique hotel, Esplendor Palmermo Soho. This is a trendy neighborhood known for its restaurants and boutique shops that is a shoppers’ paradise. We had so much fun shopping in the boutiques. I could’ve shopped for days, each shop had such unique artful fashions.

La Cabrera is a Parrilla or Argentine steakhouse and it came highly recommended by several of my friends who had previously visited Buenos Aires and it did not disappoint. It was conveniently located in Palermo Soho only a few blocks from our hotel. I have two tips:

1. Go early or make a reservation – We did not have a reservation for our party of four, but arrived early before it opened for dinner and put our name on the list. We waited outside for about 30 minutes to be called for our table and it was worth the wait. It was a little chilly that evening and they had heat lamps out to keep us warm.
2. Bring your appetite – The portions are HUGE. We each ordered our own cut of steak, but it was really way too much. We could have easily shared two steaks amongst the four of us.

The interior is quaint and has a nice ambiance. Our waiter was very friendly and knowledgeable and helped with some wonderful wine recommendations. A highlight was the huge variety of dipping sauces and sides that come with your meal. There wasn’t an empty space on the table between the steak, wine, dipping sauces and sides. After the meal was over, the waiter brought us complimentary sparkling wine and lollipops. I left La Cabrera feeling like I could’ve died happy if that was my last meal that is of course until I ate at 1884 in Mendoza (more on that in my next post). 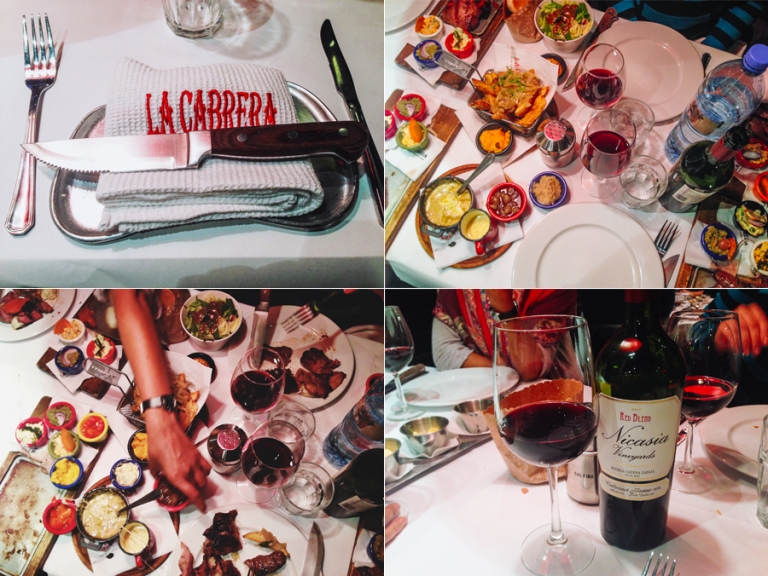 Bring US dollars with you and always ask about discounts for paying in dollars. We were able to get 20-25% off in many of the boutiques for just paying in US cash. Inflation continues in Argentina, and the people still don’t trust the banks. The government has placed many restrictions on locals for buying US dollars, so businesses are happy to offer large discounts to travelers in order to get a more stable currency.

Be prepared to stay up late! I was surprised at how many restaurants didn’t open up until 9 pm, bars until midnight and dance clubs until 2 am. People will dance ’til dawn! 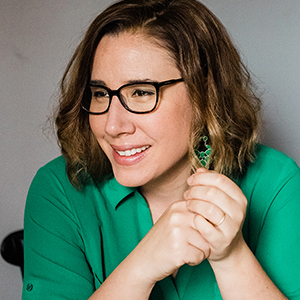 Jennifer Prophet e is a photographer, content creator and visual storyteller based in Washington, DC but down for seeing the world, collecting plane tickets and memories in 45+ countries to date.

Remi's Absolute Favorites!
an essential in my toolkit when I am traveling!Glossier skin care01
I was able to get my site set up in 2 days flat and it looks great!Northfolk Templates02
Legit cannot leave without this thing! Such a lifesaver!Desk AGenda Planner03
When you're in need of some pep talks or sleep on a plane!The Calm App04
Shop my Amazon Favorites 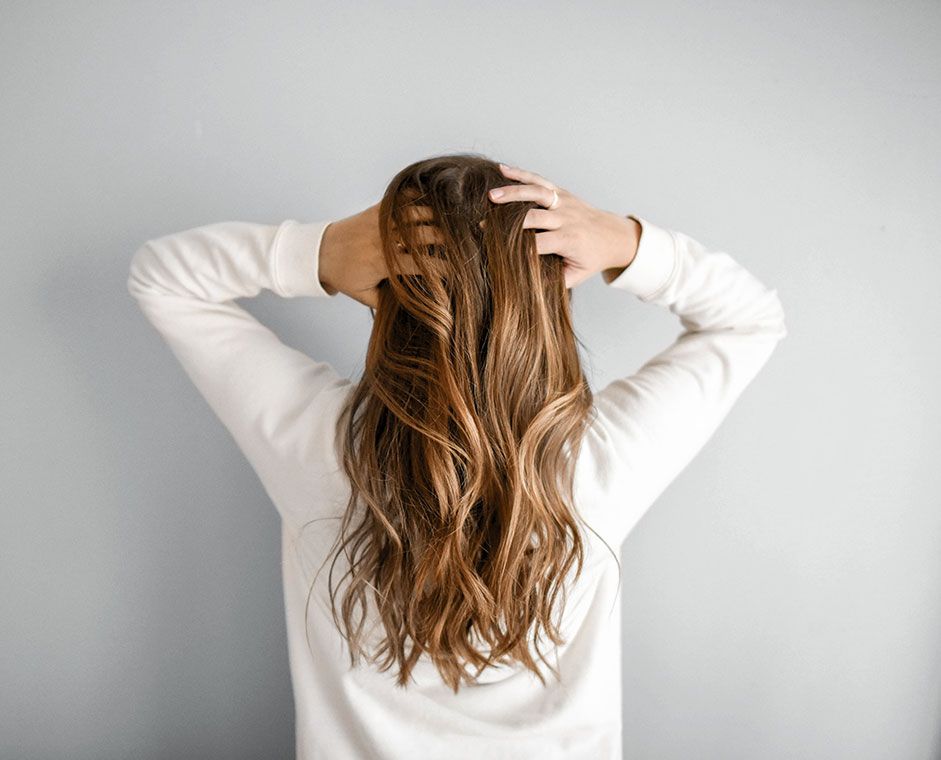 © - Content and images in this blog are copyright Jennifer Prophet unless stated otherwise. Feel free to repost or share images for non-commercial purpose, but please make sure to link back to this website and its original post.

℗ - We do not store any information about your visit to our website other than for analytics and optimization for content and reading experience through the use of cookies.

Check out the vlog for a look into our travel adventures!
jennifer prophetJENNIFER PROPHET